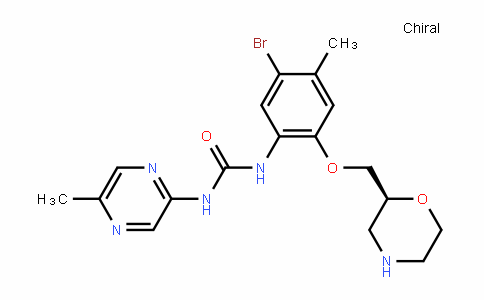 MCOPPB trihydrochloride is a trihydrochloride form of MCOPPB that is a new nonpeptide nociceptin/orphanin FQ peptide (NOP)-receptor agonist with a pKi of 10.07 ± 0.01 for the human NOP receptor. MCOPPB exhibits anxiolytic effects with no effect on memory or locomotion. MCOPPB was regarded as one of the most potent, non-peptide NOP full agonists in vitro. MCOPPB has a high affinity for the human NOP receptor. MCOPPB has a high selectivity for the NOP receptor over other members of the opioid receptor family: 12-, 270- and >1000-fold more selective for the NOP receptor than for the micro-, kappa-, and delta-receptor, respectively. In an ex vivo binding study, MCOPPB (10 mg/kg, p.o.) inhibited signaling through the NOP receptor in the mouse brain, suggesting that MCOPPB penetrated into the brain after MCOPPB was orally administered. In the mouse Vogel conflict test, MCOPPB (10 mg/kg, p.o.) and diazepam (3 mg/kg, p.o.) elicited anxiolytic-like effects, although MCOPPB produced a bell-shaped response curve. MCOPPB at an oral dose of 10 mg/kg did not affect locomotor activity or memory, nor did MCOPPB contribute to ethanol-induced hypnosis.