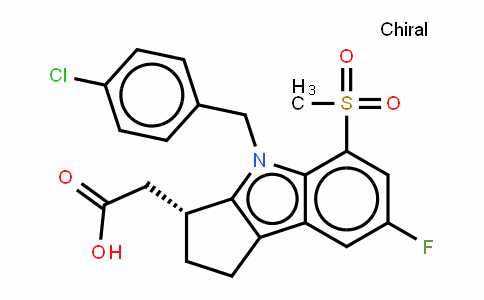 (MK-0524) is a potent orally active human prostaglandin D2 receptor 1 antagonist that is currently under development for the prevention of niacin-induced flushing. The major in vitro and in vivo metabolite of MK-0524 is the acyl glucuronic acid conjugate of the parent compound, M2. To compare metabolism of MK-0524 across preclinical species and humans, studies were undertaken to determine the in vitro kinetic parameters (Km and Vmax) for the glucuronidation of MK-0524 in Sprague-Dawley rat, beagle dog, cynomolgus monkey, and human liver microsomes, human intestinal microsomes, and in recombinant human UDP glucuronosyltransferases (UGT). A comparison of Km values indicated that UGT1A9 has the potential to catalyze the glucuronidation of MK-0524 in the liver, whereas UGT1A3 and UGT2B7 have the potential to catalyze the glucuronidation in the intestine. MK-0524 also was subject to phase I oxidative metabolism; however, the rate was significantly lower than that of glucuronidation. The rate of phase I metabolism was ranked as follows: rat ∼ monkey > human intestine > dog > human liver with qualitatively similar metabolite profiles across species. In all the cases, the major metabolites were the monohydroxylated epimers (M1 and M4) and the keto-metabolite, M3. Use of inhibitory monoclonal antibodies and recombinant human cytochromes P450 suggested that CYP3A4 was the major isozyme involved in the oxidative metabolism of MK-0524, with a minor contribution from CYP2C9. The major metabolite in hepatocyte preparations was the acyl glucuronide, M2, with minor amounts of M1, M3, M4, and their corresponding glucuronides. Overall, the in vivo metabolism of MK-0524 is expected to proceed via glucuronidation, with minor contributions from oxidative pathways